So I told you about my penchant for stuff. Heck, I can't even pack light to travel. You see, I have great stuff...especially the art, because I have so many friends who are artists. Since they are so very loving and generous, my home is blessed with beauty and inspiration.

I like odd combinations and love antiques. A great deal of my furnishings are hand-me-downs, gifts, or from estate sales, all mix 'n match funk but that is me to a tee. When I turned 50, I made a ritual of removing the last piece of "furniture" fashioned from cinder blocks, my facsimile of a t.v. stand. It is fine to have cinder blocks on the deck but within the confines of a grown-ass woman's home, hell no.

People often chastise me or question my attachment. When I bought my house, many asked if I was going to get rid of a lot of my belongings as I packed. I told them no way. What was I buying a house for if I could not have my familiar all around me? Of course, it is 14 years later and there are boxes in the attic that I have not yet unpacked but part of that stash includes books that I have no wall space left to display. Another issue: I am not big on dusting frequently. Oh well.

Although I love looking at my doodads and paintings, my collections of angels, boxes, elephants, and hearts, my rocks and crystals, I have no illusions about it:
I am merely the steward of this home, this land upon which the house was built, and all the goodies inside. I derive much pleasure from it all. And it is just on loan from the universe.

A few years back, I starting asking my beloveds to tell me if there were things in my collections that they wanted when I pass, items they either have always admired or those that may remind them of me in particular, that would draw me close when I am no longer tangible. I was completely surprised that my innocent query freaked a number of folks out. They would not discuss it. They asked me not to utter such things.
But the truth is, none of us gets out of here alive. And contrary to the notions of the pharaohs, the emperors, the popes, and the Koch Brothers, we can't take our shit with us, no matter how elaborate our crypt or how many might be sacrificed with our remains.

I know I am just holding all of this for someone for awhile. I also know it is time to catalog it all. Then, time to finally draw up a will. And figure out who gets my archives. Oh...certainly, my work is cut out for me...namaste... 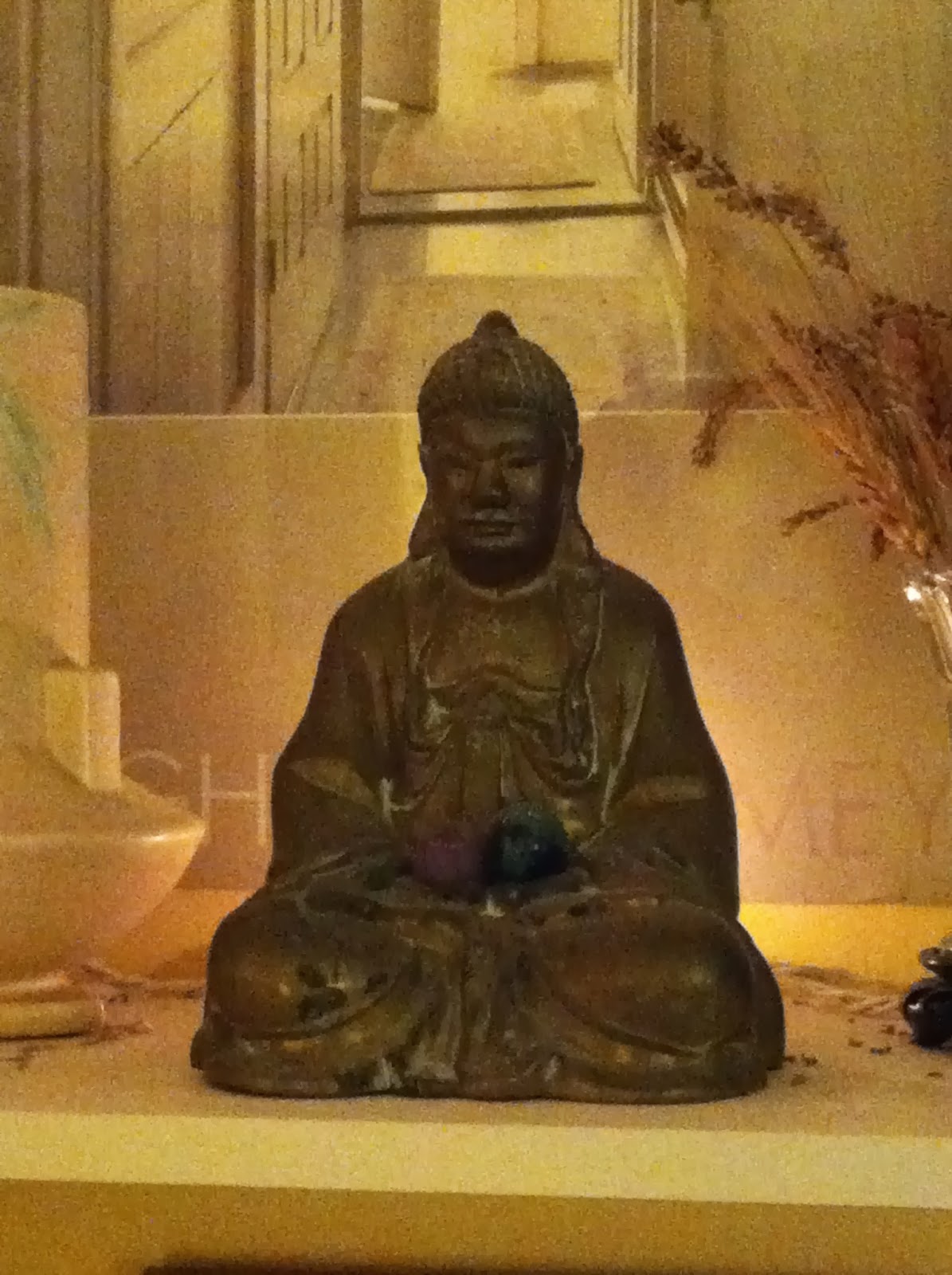 As so many know, I love stuff. My home is full of it: art, rocks, knickknacks, books, CDs, plants, kitchen gadgets, shoes, photos, more books, pens, ceramics...did I mention books?

I have an attachment to everything that I ever touch and I suffer from a severe issue with paper. Paper just piles up around me in weird ways. I cannot watch those hoarder reality shows because they scare me. I feel so uncomfortable because a part of me so thoroughly understands. But I am not going to explain my neurosis to you or detail the patterns. It is something else that is teasing my sensibilities.

One of the issues of being so attached to physical things has to do with when I lose something. I have had so many lessons from losing things I cherish, mostly in how mysterious the universe is, how inexplicable and marvelously irrational. Sometimes things are just lost forever but sometimes life works in one's favor.

A couple of years ago, I met the marvelous poet Kwame Dawes at the AWP conference. A brief and delightful encounter, somehow we wound up discussing losing things and finding them again. I shared that I have had many moments that gave me reason to pause at the mystery. If I remember correctly, Kwame had also experienced little miracles similar to mine. After mentioning a couple of incidents, I told him that I would share the events more thoroughly when we both had time so, Kwame, in case you are wearying of the Olympics, ponder these weird incidents from my long history of lost and found:

1) Jewelry falls off my body when I need to change my vibration. You folks who have experience in the metaphysical belief systems similar to mine know what I mean; I have had gold bracelets fall off my wrist with no break on more than one occasion after wearing them for months or even years. Once one disappeared while I was on a sofa-surfing reading tour of SoCal. I discovered that it was missing at a reading so it could have been anywhere. Although I had a few moments of distress, I realized that I could do nothing, that it was gone, so I just had to accept that it was gone. I adapted quickly but I have had much practice. After the reading, returning to the apartment where I was staying with friends, as my hosts opened the door, I noticed something shiny on the door jam. There it was, stretched right before me and fully intact, the clasp unharmed. I put it right back on and wore it for a long time, until...

2) The bracelet fell off again, somewhere in my daily running once I returned to Central NY. I looked all over the house. I called a couple of places where I had been. It was gone. I had a little indulgence in my grief and adjusted. One day, many weeks later, I happened to drop my hand along the side of the driver's seat of my car. I do not even remember why I did so but my fingers rested on something thin and familiar. The bracelet was back. Again, unbroken; it had just disengaged from my body. I did not put it back on.

3) Several other bracelets have broken and fallen away but I have found them. I chose not to have them fixed or I waited for a long time. I can take a hint.

4) My dear friend Stazja McFayden went to the UK on a reading tour and to meet up with poets she had met in her many years of organizing and publishing poetry. Shortly after she returned, I received a gift in the mail, a beautiful pair of earrings that had been made in India. I loved them and wore them frequently over the next few weeks. The problem was that the earrings were the kind that just hook into the ear and it was winter, with a need for scarves. One day, I noticed one of the earrings was missing. I was struck with disappointment, especially because of the fact that they were a gift. I looked under the seats of the car repeatedly, remembering the previous experience. I looked everywhere and finally resolved to accept the loss.

Months later, I was vacuuming the house a bit more thoroughly than I often do. I pointed the hose attachment under a small bookcase in my front hall but there was something that it just would not pick up. I thought it was a pebble or something brought in from the outer world. I tried several times but whatever it was just refused to be sucked into the belly of the machine. I bent down to determine what this substance was and, wrapped in a dust bunny was the earring that had been missing. I was so excited! I called Stazja to tell her that her gift had returned, with great relief and gratitude.

5) In 2001, I had the honor of teaching a week-long workshop in Tuscany on behalf of Il Chiostro. On the last day of our time at Villa Dievole, I discovered that the antique white gold wedding ring that I had been wearing as a toe ring for a number of years was missing from my foot. I tore the room apart, shook out the bedding about 20 times, looked under the mattress, stressing, of course. I finally remembered that I had been sitting with my feet dangling in the pool a day or so before. It was worth a shot, especially after some profound prayers to St. Anthony. Deep in the water, below the spot where I had sat, I saw a very small glint. By a miracle, it had not been sucked up into the filtration system. I was able to communicate with the grounds keeper who spoke almost no English that my toe ring was lying on the bottom of the pool at the deepest spot. He took much pity on the sad woman I was and ran to his took shed, where he fashioned some sort of small hook at the end of a long rake handle. He tried over and over to nab the ring, to no avail. I tried to convince him that it was ok, I understood it was too difficult so don't try anymore but he kept poking the stick down into the water, refusing to be defeated. And he wasn't! Joyfully, he brought the little circle up through the cool water and retrieved my grateful smile along with it.

The next day, in a small chapel in Rome, I made a generous offering to the shrine of St. Anthony. It would have been foolhardy to not do so.

6) Another earring tale: a friend gave me earrings for Christmas in the mid 90s. That day, while visiting friends for the afternoon, I discovered that one of my brand new earrings had fallen prey to the scarf factor. I was decidedly bummed, until I discovered the earring on the ground in the snow next to my car.


7) I have a treasured personal item that I have kept close since I was 16, a little nothing other than it means so much to me and has been with me for so long. On the tail end of a trip to NYC,