A Brush with Greatness - Part 2 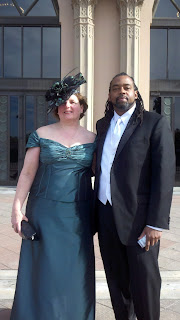 It is hard to believe that it has been a week since Q and I stood in our finery for our photo before entering the Shrine Theater to discover the fate of our book. Anticipation is so much more absorbing than fact. Think about it in your own life. We worry and we hope and once we receive outcomes, all that effort is nullified. I keep trying to live without expectation, anticipation, but it is a human trait so I am not always very successful.

We did not receive the trophy but we gained a great deal in the process and we made some wonderful contacts, as well as shared the experience with family and friends. We will always be able to use the nomination as a marketing tool. We are also always able to say to each other that we knew we were right; if we applied, we would get the nomination. The big machines that support several of our fellow nominees aside, we were in good standing with notable authors as a part of a remarkable program. There are politics involved and we learned a great deal about that as well. But we were there and we attended the big show besides. Quraysh was thrilled beyond belief when Ms. Cicely Tyson said hello as she brushed past his aisle seat. We were both astounded and honored to stand in line for the Red Carpet with the Tuskegee Airmen. Now these were true celebrities, authentic heroes, and living history.

Would I do it again? Yes I would. But I would be much wiser in some of the logistics that such events entail. I would have a publicist ram through the clogs at the velvet rope. And I hope I would bring home the hardware, if I could. On the other hand, I am satisfied and had a terrific time so it was all worth the time, effort, money, and anticipation. Thanks to all who supported me personally to make it possible and to those who have and continue to support this book. 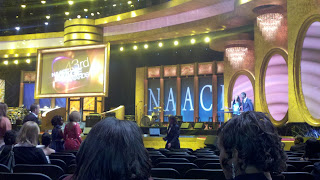 Our Brush with Greatness - And Now Back to Work

A month ago, my coauthor, Quraysh Ali Lansana, and I received notice of nomination for an NAACP Image Award for Outstanding Instructional Literature. We had been confident that we would be so recognized if we presented the book for consideration and that day affirmed our anticipation, as well as our belief that we have created something of tremendous value.


This experience is as close to Dancing with the Stars or American Idol I can imagine right now. We were in formidable company in the listed nominees:

We were clearly faced with a great deal of work to compete with this slate of nominees. Each has a tremendous national presence, the backing of big publishers, and so on. We are two poets and educators running as fast as we can to share the tools and resources we have put nearly 5 years of our lives developing that resulted in this book coming into the world.
It was last week when I started thinking that we could possibly win, in spite of our relative newcomer status. I can liken it to the musical "overnight sensation" whose bio states that there are 20 years of small gigs and broken-down-van tours before hitting the big time. Maybe this would be the chance for the lesser known to pull off a grassroots campaign and surprise everyone.

It would prove to be labor intensive and daunting. Then there was the concern of getting both of us to Los Angeles for the ceremony and array of events that nominees would be able to attend. Quraysh had the support of his university for this travel, giving me moments to question myself again about not pursuing an academic career.

I grappled with my choices. I looked into Kickstarter since I know many who have been successful with that vehicle for jumpstarting projects but decided that a direct appeal would be better and leave the Kickstarter option open when I needed to seed a bigger project. I struggled with asking my community for support for many reasons but it was the only answer. A couple of key confidantes urged me to state my need so one Sunday night a couple of weeks ago, at 10 p.m., I sent out an email to 250 friends, family members, and colleagues petitioning for support by voting for the book, sharing the word of the nomination campaign, and then the very specific need for travel funds so I could head to Tinsel Town.
Astoundingly, I had pledges and contributions to meet most of my expenses within 24 hours, then more that permitted me to accommodate the rise in the hotel costs I incurred from first research on line to what it would actually cost once I could book the room, as well as breathing easily in paying for incidentals, meal tabs, etc. It was a remarkable outpouring of love as well. I was overwhelmed and honored.
We were in the middle of Hollywood's fluff. We quickly learned the rules of the Red Carpet, even if not overly successful in getting before the cameras. We dressed up and strutted with the famous, the almost famous, as well as some of our friends who were nominated in the poetry and fiction categories, all of us a little glazed by the frenzy and flash.
Bishop Jakes won the trophy. He was not there to accept the award and offer gratitude. The two lithe young actresses tasked with the pre-show award announcements accepted on his behalf. Naturally, a part of me is wishing that this could have been a 21st century Cinderella story in which we received the prize, and all of the opportunity that we would have garnered from it, especially the press being a winner would have afforded our project and resultant work as consultants. Yet I know that we are winners to have gotten into the deep with this roster of noted authors. We will always be able to tell folks that we were Image Award nominees. We will always be affirmed in the mission of this book from the beginning of our collaboration to this very day. We were right...
In the next episode, I will share some of the tales from the Red Carpet. Right now, I need a shower and I have to head out to the social media networks to thank everyone for their vibes, prayers, and support. To all of Quraysh's and my friends and circles, we are the winners. I am grateful to you all as well as for this marvelous, confounding life.
Posted by Georgia at 12:14 PM No comments: 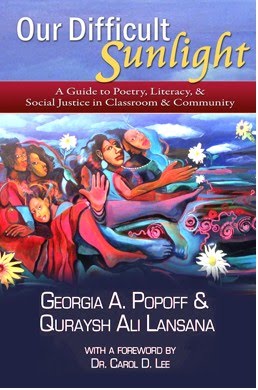